This post was inspired by a Facebook comment discussion with Matthew’s cousin Alexis. We were discussing the things we never thought we would do or see as parents, but here we are… Alexis has four kids (two are hers, two are her husband’s from a previous relationship) under 8, so she stays busy. Her brother’s (now ex) girlfriend is pregnant with their first son and doesn’t quite know the adventures of parenting- she apparently thinks she will never see a blow-out.

*evil Mommy laugh* Oh, Jessica, are you in for a rude awakening. October is gonna be a very interesting month for you.

Raise your hand if you have more than one kid and you envisioned that they would never fight and get along at all times. I’ll wait.

Exactly. My sons are almost ready to qualify for WWE wrestling spots. Julian has a great headbutt (I know this, he almost broke my nose once). I’ve heard thuds and screams that would stop a non-seasoned mom’s heart. Me? I just make sure they’re still in one piece. It’s not like they have breakables in their room. They randomly walk up on each other and poke them.. disturbing their calm. Anyone else? It’s like they can’t live happily knowing the other is peaceful.

All the shade goes to mom

I did not envision the amount of snark and shade that would enter this house or my response to it. When you are sarcastic and have sarcastic/snarky kids… things get interesting.

The mini-queen of shade (because I am the reigning queen of shade in this house) is Lily. She’s not tiny but the shade is real. So are her eye rolls, door slamming skills, and stomps. The pre-teen years are here and not going anywhere.

I hear it only gets worse, so someone send me an endless supply of Cherry Coke and chocolate. Thanks. I’ve been told I am “the meanest mom ever”. “I don’t even like you”, “I never liked you anyway”, you know, all that fun stuff. But then, at the end of the day, Lily wants to hang out with me so I guess she might like me after all.

When I imagined motherhood, I imagined a cleaner house than I currently have. I also didn’t imagine a daughter that is super messy. The boys team up and clean their room in less than a half hour. Lily takes days. She cries and pouts her way through it and just… no. It has taken me two hours to do it before and then I can’t move the rest of the day. We are re-doing their room this summer- the boys are getting new beds, and both the kids’ rooms are getting re-painted. This means a huge cleanout. Again, Cherry Coke please. I slightly obsess over my kitchen counters being clean (they’re gross at the moment) and the floor is never clean, but we have much more fun doing other things anyway.

When Lily goes to college, I’ll be 43. Unless my RA has progressed terribly, I will still have the energy to clean the house. If it has, I’ll hire someone and be done with it. Until then? I can forget a spotless house. I attempted this when the kids were smaller and nobody was happy. These days, well, the kids help and this is good.

Fall and winter are great around Kentucky until you mention jackets and coats. Ugh. I have to almost shove the boys into them. Lily ends up looking like Ricky from “A Christmas Story” from October-March. Julian hates bulky coats because of his sensory issues and Cameron loves the cold like Matthew so you can see the issues I face. Both boys end up with polar fleece jackets. I can forget gloves unless it snows but luckily they like hats. Cameron lived in a Seahawks toboggan for two winters.

Getting them to wear jackets is a process. I have to tell them what the temperature is in the morning and what it probably will be when they get home because otherwise they will take their jackets off. I’m not kidding. Cameron took off his jacket on the bus one day and proceeded to try to walk home when it was 35 degrees out. I stopped that idea as soon as I saw him. I never thought I would argue with a kid over wearing coats and weather, but every fall and winter, here we are.

A friend in Maryland has the same issue. Ironically, she also has a Cameron.

Me? I bundle up as soon as it hits 40 degrees. I hate cold weather.

I never saw myself as the helicopter mom, because I just don’t have it in me for all that. I figured I’d be watchful but not too overbearing.

Then I had three kids.

Like every other parent on the planet, I have two ears, eyes and hands.

I used to intervene with the kids’ battles, but.. jeez, they’re pre-teens and it’s called problem solving. They learn this at school and can apply it in real life at home. It drains my brain and patience. Kim Bongiorno knows my life. Now, I’m just like, “Y’all have about three minutes to figure this out, because I’m not listening to it all day.”

Who wants to hear kids fighting all day? I most certainly do not. My kids are too loud for all that and I’ve only got so many migraine meds.

Parenting will make you do a LOT of things that you don’t envision before. Some are hilarious, some aren’t. May the parenting force be with all of us for the rest of summer vacation. 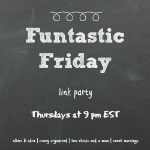